The government have today agreed to give MP’s a vote on any final Brexit deal before it is signed.

Speaking in Parliament earlier today, Brexit Minister David Jones confirmed that the government’s vote will cover withdrawal from the EU, and the UK’s future relationship with the EU.

Mr Jones said: “First of all we intend that the vote will cover not only the withdrawal arrangements but also the future relationship with the European Union. Furthermore, I can confirm that the government will bring forward a motion on the final agreement to be approved by both Houses of Parliament before it is concluded, and we expect and intend that this happen before the European parliament debates and votes on the final agreement.”

Following todays concession by the government members of Parliament have this evening voted against including a labour proposed amendment to the Brexit bill that would allow a parliamentary vote on any potential Brexit deal negotiated by the Government.

The vote follows a motion by the Labour MP Chris Leslie in the House of Commons earlier today.

The amendment, known as NC110 comprised the following:

“Future relationship with the European Union

(1) Following the exercise of the power in section 1, any new Treaty or relationship with the European Union must not be concluded unless the proposed terms have been subject to approval by resolution of each House of Parliament.

Several prominent Conservative MP’s who had voted remain voted with Labour in favour of the amendment, including Kenneth Clarke, Anna Soubry and Heidi Allen.

A secondary motion demanding a Brexit reset button in the case of an unfavourable deal which was proposed by the SNP was also defeated but by a much larger majority of 288.

The government faces another vote tomorrow on the rights of EU nationals living in the UK, but tonight’s vote was seen as an opportunity for the opposition to derail the governments Brexit plans.

However since the vote was defeated Theresa May is on course for achieving her aim of getting the article 50 bill through the Commons without it being amended. 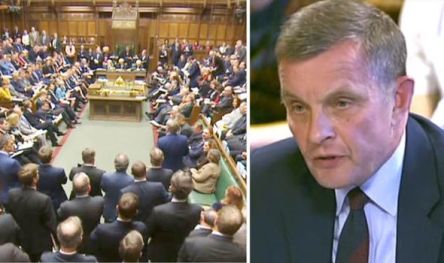 MP’s have voted overwhelmingly to back the governments European Union (Notification of withdrawal) bill in a parliamentary vote today.

The final count was 498 votes in favour with 114 votes against conferring a majority of 384.

The bill will now pass to the next stage in the political process, clearing the way for Prime Minister Theresa May to publish a government white paper on Brexit tomorrow.

Tonight’s vote followed weeks of speculation that Labour leader Jeremy Corbyn would impose a three line whip on Labour MP’s, urging them to vote in support of the government.

What is a three line whip?

In the UK a three-line whip is an instruction given to Members of Parliament by the leaders of their party telling them they must vote in the way that the party wants them to on a particular subject. Or more roughly translated, vote as we all vote or you’re out.

Forty-Seven member of the Labour party defied their leaders wishes and voted against the government, along with members of the Scottish National Party and the Liberal Democrats.

Prominent europhile and former Conservative chancellor Kenneth Clarke voted against the government after yesterday likening the Prime Ministers Brexit plans to Alice In Wonderland: “Apparently you follow the rabbit down the hole and emerge in a wonderland where suddenly countries throughout the world are queuing up to give us trading advantages and access to their markets that previously we’ve never been able to achieve.”

The bill now faces further scrutiny in the Commons and the House of Lords before it can become law.

The prime minister has set a deadline of 31 March for invoking Article 50 of the Lisbon Treaty, getting official talks with the EU started and this is the first of many steps to come in achieving this goal.