Donald J Trump has just been sworn in as the 45th President of the United States at an inauguration ceremony on the steps of the Capitol building in Washington DC.

President Trump takes the oath of office, flanked by his wife Melania

Amidst heightened security and reports of earlier protests, Mr Trump and Mike Pence, the vice president took their oaths of office administered by US chief Justice John Roberts.

In a speech that was full of the bluster of Trump the candidate, the new President called January 20th “the day the people became the rulers once again. The forgotten men and women of our country will be forgotten no longer. Everyone is listening to you now.”

“We, the citizens of America, are now joined in a great national effort to rebuild our country and restore its promise for all of our people,” Trump told the crowds as rain fell over the capital. “Together we will determine the course of America and all of the world for many many years to come.”

One in One out: President Trump and his wife Melania pictured with Barack and Michelle Obama

Speaking directly to his supporters, President Trump said “From this day forward, it’s going to be only America First, America First,” and described American economic policy in the future as being “two simple rules”: “buy American and hire American.”

Flanked by former Presidents Obama, Bush, Clinton and Carter, Mr Trump took a moment to speak about unity, saying “Whether we are black or brown or white, we all bleed the same red blood of patriots,” he said. “Whether a child is born in the urban sprawl of Detroit or the windswept plains of Nebraska, they look up at the same night sky … and they are infused with the same breath of life by the almighty creator.”

So, a man with no previous political experience is now America’s 45th President. It will be an interesting four years in American politics and indeed the politics of the world. 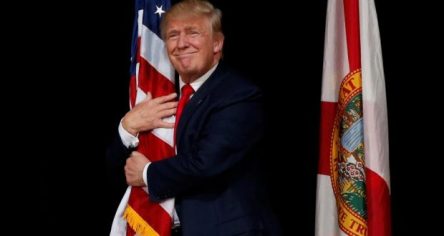 The United States of America has intervened in the political affairs of a foreign power.  These are powerful words, full of intent and purpose. So often in the world the U.S has flexed its political and military muscles to bring about change in a foreign power over the 20th and 21st centuries.

Barack Obama, 44th President of the United States of America and the first black man to hold the office is running out of time.  In the waning months of his second term as president, he knows that his time is almost up. The vultures are circling; ready to pick apart the carcass of his presidency once he becomes a private citizen again. He has faced a heavily Republican senate, eager to block any and all legislation, a partisan populous not ready to face the harsher realities of the post crash world and an international community filled with crises and division.

Like a prize-fighter who knows his fighting days are over, Barack Obama has nothing to lose and can throw everything he’s got at his presidency. His conservative, compassionate stance has gone and has been replaced by a rushed desire to achieve lasting impact in his few remaining months as president.  He has vehemently spoken out on gun crime, on international terrorism, the economy and has pushed through significant diplomatic changes to the United States relationship with Cuba, paving the way for the greatest change in political relations between the two countries for half a century.

Turning his attention away from domestic affairs to Europe and the UK could be seen by many as a dramatic overstepping of his presidential authority.  Indeed the rebukes since his initial speeches from the Brexiteers have been as stinging as they have been numerous.  By all means intervene in a foreign power, but save that intervention for a third world country or a dictatorship but don’t intervene in the affairs of an international partner, particularly one who you enjoy a “special relationship” with.

It’s easy to rebuke him, call him a hypocrite and ignore him, but as objective individuals we must look beyond the words to the real aims of his intervention in this integrally British issue.

We’ve already mentioned one point that is a key motivator for him: preserving the “special relationship”. The US has a vested interest in keeping Britain strong and an international power because we can achieve what they cannot: we can tread the fine lines of Europe, work in American interests and still be seen as an independent nation.

Our country provides a vital exporting and importing market to the US with many companies depending on British wealth and spending power to finance them.  Should the UK leave the EU, the United States will have to renegotiate its existing trade agreements with a newly independent UK. Renegotiation takes time and could cause damage to world financial markets, particularly across the European Union.

British influence on the EU cannot be understated, we are one of three key leading nations in the greater European alliance, the others being France and Germany. Our voice carries a significant weight and provides additional strength to the EU message.  As a significant political partner, America cannot help but see this and obviously make the logical leap that Britain outside of the EU is a weaker EU.

You get the sense that America is playing a long game, keeping the EU strong enough while it readies itself for the inevitable confrontation with the newly resurgent Russian Federation.  A strong EU preserving its borders can accomplish more politically than NATO could in military terms, drawing other territories into the union and strengthening its existing members. Other nations in the EU have dithered in the past on larger world concerns like Iraq and Afghanistan but the UK has not, we have been prepared to move forward where others have been reticent to do so.

That voice in the EU could be used to motivate it to pursue the eventual military action which will undoubtedly occur as the two great superpowers continue to butt heads.

On the other hand, President Obama could be a pawn in a European game designed to keep Britain in the EU in exchange for certain US concessions across the territories.  The statements and speeches have been public but the real politics may be completely secret.

Is he right to do so?

Putting speculation aside, the ethics of President Obama’s intervention in this debate are questionable at best. We are not a dictatorship or a totalitarian society, British democracy has been key too much of the worlds greater democracy and indeed the US owes its constitution and political system to our political system.  Intervening in this debate is ill advised and would only be considered by the US if the issue itself were so serious and so game changing that not intervening would be perceptibly catastrophic to American long term interests.

Whether his intervention proves to be a catalyst for a remain landslide or it provokes the opposite response, he has thrown his hat into the centre of the ring and it is up to us now as voters to decide whether this is right or wrong.

What do you think?

In any election or contest there are crunch points, points where individuals step to the fore and all future events are decided. Tomorrow is one such event.

The political bloodbath that is known as Super Tuesday takes place tomorrow morning in 12 American states and one overseas territory. By the end of tomorrow, we should know definitively who America wants to be its candidates on both the Demoratic and Republican tickets.

The long road of caucusing, campaigning, mudslinging and debating which began prior to the first New Hampshire primary will end.  Everything comes down to this and potentially the next four years of US government will be shaped tomorrow, when voters from Alabama to Wyoming cast their ballots.

So, what can we expect?

Concession speeches on an almost hourly basis, words of congratulation and commiseration on both sides, a practical re-purposing of existing campaigns to a more election facing slant and a great deal of column inches and editorials.

Who are the potential winners?

The Republican field of candidates has dominated both the US and international media with one candidate being thrust into the public eye: Donald J Trump.  Mr Trump’s predominantly extreme views and election campaigning style have undoubtedly appealed to American voters, keen to return to the “good ole days” when America commanded the world. This brash, Pope bothering and gaffe prone pseudo-political heavyweight has been keen to exploit what many see as the failings of the Obama administration and the fears of ordinary Americans in a post 9/11 world.

While he has garnered votes and won districts, his rivals have appeared almost impotent in their inaction. Their failure to play the campaign his way has cost them potential nominations. Only Marco Rubio seems to have got that message, but it’s too little too late for his candidacy. Trump should win and win comfortably.

The loudness of the Republican campaign has been in stark contrast to the quiet and dignified Democratic campaign and its two largest candidates: Hillary Clinton and the businessman Bernie Sanders.

Clinton, a onetime first lady and secretary of state under President Obama has won 3 out of the 4 presidential primaries, with the only exception being her dead heat with Sanders in New Hampshire.  She is a seasoned politician and has raised almost $130m for her campaign, raising almost $21m more than when she ran against Barack Obama in 2008. It’s hard to see any other result than a Clinton victory but expect a few minor shocks from Sanders along the way.

The popular HBO series Game of Thrones has a saying “When you play the game of thrones, you win or you die”. In many senses this can be applied to the forthcoming contest, with the exception that the only deaths will be political ones (hopefully). Once America chooses its respective candidates on both sides then the game will truly begin, culminating on November 8th when one will rise above the other and claim the ultimate prize: The Presidency of the United States.