Retired general Michael Flynn, who had served as national security adviser to U.S President Donald Trump resigned on Monday after allegations of secret discussions with the Russian ambassador to the U.S.

Mr Flynn claimed he had mistakenly misled the vice-president, Mike Pence, and other Trump officials about the nature of phone calls in December to the Russian ambassador, Sergei Kisilyak.

It was revealed that these discussions were regarding the lifting of U.S Sanctions against Russia, in place since the last days of the Obama administration and due to alleged state sponsored hacking by Russia. 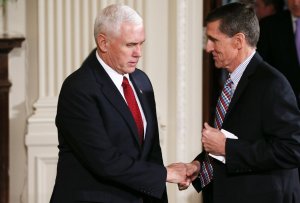 Flynn admitted to lying to the Vice President, Mike Pence

In his resignation letter, Mr Flynn said “In the course of my duties as the incoming national security adviser, I held numerous phone calls with foreign counterparts, ministers, and ambassadors. These calls were to facilitate a smooth transition and begin to build the necessary relationships between the president, his advisers and foreign leaders. Such calls are standard practice in any transition of this magnitude.”

“Unfortunately, because of the fast pace of events, I inadvertently briefed the vice president elect and others with incomplete information regarding my phone calls with the Russian ambassador. I have sincerely apologised to the president and the vice president, and they have accepted my apology.”

The resignation comes after it was revealed that the Department of Justice had warned the White House that Mr Flynn might be vulnerable to Russian blackmail.

President Trump has named retired general Joseph Kellogg, as acting national security adviser, pending the appointment of a permanent successor. It has been widely reported that former CIA director David Petraeus may be appointed to the post but these reports have yet to be confirmed.

Mr Trump, who is currently playing host to Canadian Prime Minister Justin Trudeau chose not to directly comment on the resignation which is the latest in what has been a chaotic start to his life in the Oval Office. He instead took to twitter bemoaning the number of information leaks which have occurred over the last few weeks.

The real story here is why are there so many illegal leaks coming out of Washington? Will these leaks be happening as I deal on N.Korea etc?

Adam Schiff, Democrat senator and member of the House Intelligence Committee has called on the Trump administration to confirm when contact with Russian officials began and who was ultimately responsible for allowing them to take place.

Schiff said: “The Trump administration has yet to be forthcoming about who was aware of Flynn’s conversations with the ambassador and whether he was acting on the instructions of the president or any other officials, or with their knowledge.”

Suspicions regarding Russian involvement in the U.S Election still remain and this latest resignation will do nothing to allay fears that Russia may be interfering in American politics at the highest level.