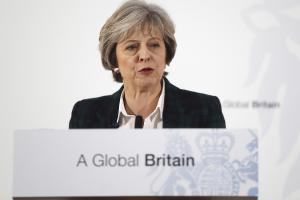 Prime Minister Theresa May has today outlined her strategy for Britain’s exit from the European Union in a speech at Lancaster House in London.

The Conservative leader made clear that she would look to pursue a ‘Hard Brexit’ from the EU and that there would be no compromising on things like immigration, access to markets and parliamentary sovereignty.

Mrs May said “We do not seek to adopt a model already enjoyed by other countries. We do not seek to hold on to bits of membership as we leave. The United Kingdom is leaving the European Union. My job is to get the right deal for Britain as we do.”

In a conciliatory but firm statement, the Prime Minister confirmed the following:

Britain will not remain a part of the single market

Britain will remain a member of the customs union

Trade formed a large part of the Prime Ministers speech and she confirmed that Britain would look to remain a member of the customs union with Europe. However she was keen to specify that Britain would not look to be subject to the common external tariff (a tax on all goods coming into the union from outside it).

The prime minister would not be drawn on whether the custom’s union’s policy of no member country negotiating trade deals on its own would be something that Britain would look to avoid.

The phased approach to Brexit

The Prime Minister underlined the requirement of any exit strategy from the EU to be phased in rather than having what she called a “cliff edge” point, which could cause irreparable harm to the UK economy.

Phasing arrangements would allow the economy, industry and public institutions to make necessary preparations for life outside of the European Union.

Mrs May confirmed that she would look to conclude negotiations with the EU within the two year timescale provided for by Article 50 of the Treaty of Lisbon.

Controlling Immigration to the UK

The control of Britain’s borders was a crucial part of the decision to leave the EU and the Prime Minister reiterated her desire to enforce this policy.

However, she affirmed that Britain wants to continue to attract “the brightest and best to study and work in Britain”.

Referring to her time as Home secretary, Mrs May said “You cannot control immigration overall when there is free movement from Europe … Brexit must mean control of number of people coming to Britain from Europe.”

The UK’s immigration system post-Brexit has not been announced and the Prime Minister made no reference on how policing immigration from the EU would occur.

The authority of the European Court of Justice in the UK legal system will cease after the Brexit negotiations are concluded, the Prime Minister has confirmed.

Leaving the EU meant leaving all the institutions of it, with the Prime Minister arguing “We will not have truly left the European Union if we are not in control of our own laws.”

It is widely expected that the Supreme Court will assume all the legal responsibilities currently being undertaken by the European Court of Justice.

In a move that will appease both remainers and opposition parties alike, Mrs May has confirmed that any final Brexit deal committed to by the UK will be the subject of a vote in both the Houses of Parliament and the Lords.

This move will allow MP’s and Lords to block the plans, but is a vital move in confirming the sovereignty of Parliament in the Brexit negotiations after the recent Supreme Court case involving campaigners led by Gina Miller.

The timeframe for the Brexit deal to be put to the House will be confirmed shortly.

Mrs May stated that “I must be clear. Britain wants to remain a good friend and neightbour to Europe but I know there are some voices calling for a punitive deal. That would be a case of calamitous self-harm for the countries of Europe and it would not be the act of a friend. Britain could not, indeed we would not, accept such an approach.”

The Prime Minister said she believed that this would not occur but said that “no deal would be better than a bad deal”, warning that Britain would be free to set competitive tax rates, echoing earlier comments by the Chancellor Phillip Hammond.

However she also called for a close relationship with Europe after Brexit- ““Our vote to leave the European Union was no rejection of the values we share. The decision to leave the EU represents no desire to become more distant to you, our friends and neighbours. We will continue to be reliable partners, willing allies and close friends,” she said.

Cards on the Table?

By confirming the sort of deal that Britain wants from Brexit, the Prime Minister has placed Britain in the metaphorical driving seat of the Brexit negotiations. Much will be made of what the Prime Minister did not say and the lack of specificity on certain points but this is an important step on the road to Britain’s exit from the EU in two years time.